I was speaking to a golf club this week about a head greenkeeper that wasn’t performing.

There was a long list of things that this person:

…plus general comments about him not being ‘proactive’.

But the cherry on top?

“He has not been doing his H&S tasks of risk assessments, training or making his staff wear face masks (PPE)”.

Unsurprisingly, this caught my attention much more than the other points, and – frankly – should have been the first bullet point.

Failing to complete those tasks is by itself potential gross misconduct, which could lead to a dismissal with no notice or at least a productive “without prejudice” conversation.

(“Productive” meaning that the person concerned can clearly read the writing on the wall and takes the offer to leave.)

Make no bones about it: not following H&S guidelines is a major disciplinary offence. Particularly now with the additional Covid-19 regulations.

Even if they are doing everything else right, if they are refusing to wear PPE, that is a potential dismissal offence.

We once had a greenkeeper who refused to wear steel tipped boots because he said it was painful with his gout (a disability).

Only thing was, the head greenkeeper also had gout, but could wear the boots easily because he was taking his medication, while the other greenkeeper wasn’t.

Once we had a first level disciplinary meeting to that effect, he was more than happy to take his medication rather than continuing down the slippery slope to dismissal.

We had another greenkeeper who had been, to be honest, a thorn in the Club’s side.

But he’d also annoyed his colleagues, so they were more than happy to video him using a strimmer without any of the PPE required, even though he had just been retrained on the equipment and the risk assessments.

Showing him that video in the disciplinary led to an immediate resignation.

All these stories (and I have more!) show the need to clamp down on any problems with Health and Safety.

Doing so doesn’t just protect the greenkeepers, but it also protects you.

You see, legally you CANNOT get your employees to sign anything which makes them liable for any injuries to themselves that come from not wearing PPE/following H&S rules.

Instead, it’s the Club – and more specifically the Club Manager – that’s liable for any infringements, with the ultimate penalty of prison for corporate manslaughter.

So, if you have anybody who is not following H&S rules, give us a call to work out the best way of dealing with it. 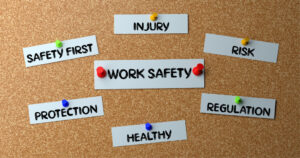