I don’t have a sales or marketing manager here at Gap HR.

I do it all myself, and there’s a simple reason why: I love it.

But this summer, a vital part of marketing (the follow up) went a bit pear-shaped.

We moved office and the kids were off so there was a bit of disruption, so with the best will in the world, I haven’t been following up as often as I should, or even at all.

I have a long list of potentials that I haven’t spoken to since May or June, which is pretty much criminal.

One redeeming aspect is that they are all on my weekly email list, so they have been hearing from me, but not in a sales context.

Now things have settled down at work, I am back on it, chasing them for a decision.

And this morning it was really tempting to make assumptions about who would say Yes and who would say No, and only focus on the Yes people.

After all, does anyone want or need more rejection in their life?!

But there is one voice that I always hear in my head when I am doing sales.

I work with a marketing consultancy called Ideal Result, and one of the partners there is a pretty forthright chap named Thom Smith.

And whenever I consider forgetting the suspected Nos, Thom’s voice is always there:

“You do not stop following up until they say no. And THEY have to say no, not you”.

With these words reverberating in my eardrums this month, I looked at my list of potentials and rang one where we last spoke in February, with a follow up email in May. Nothing since.

I thought it was a guaranteed no, so I rang to get it out of the way.

He answered the phone with, “Your ears must have been burning! I was just talking about you! Our contracts and handbook are much worse than I thought they were, so how can we work together?”

We talked through the options, sent them through by email and they signed up today, the same day!

What I thought was a definite no, turned out to be one of the fastest signups ever!

If you have potential clients who you haven’t spoken to in a while, give them a call. They might say no, but then you don’t have to chase them any more, they will be off your list.

And who knows, they might just say yes and make your day! 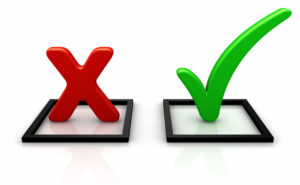