We recently had a situation at a client who had been “too nice” to a new employee.

You might think it’s impossible to be “too nice”, but hear me out:

The client had employed his first female in his fairly new business.

In her first week of work, she was off one day sick and went home early another day.

In the first week!

He rang us and we discussed parting company with her, but at that stage we thought she had haemophilia, which would have been protected under disability discrimination.

He did a return to work interview with her where she said it was actually anaemia that was causing the problems (not a disability) but was then back at work for the rest of the month.

When the second month rolled around, she called in sick every day of the first week.

And when I say “called”, I actually mean, “got her mum to text in on her behalf”.

We decided to go ahead and terminate on the grounds of not following the sickness absence procedure.

There was one small snag in that she’d never been given a contract, and we couldn’t prove she’d seen the handbook, but we went ahead, dismissing her for not following the procedure.

A week or so later, our client received a reference request for her new job, which makes it highly unlikely that she’ll start a case against us.

There’s an important point here though: the contract was not worth the (electronic) paper it was written on because it had never been given to the employee.

Some employers feel uncomfortable asking the employee to sign the contract, if they don’t volunteer to.

The best way we have found to get things signed and start the working relationship on the right foot is:

Remember, your employees are not doing you a “favour” by working for you. It is a two-way street, and they always have the ability to leave, unlike us business owners! 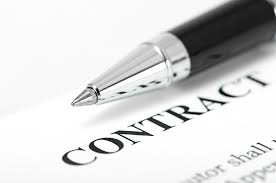