I’m a night owl.  Always have been.

Getting up at the crack of dawn has never been my thing, and consistently I’ve done my best work and had my best ideas once the sun has dipped below the horizon.

But, being a mother of two, I’ve had to adjust over the last two decades, because they really messed all that up.

With children, you’ve no choice but to be a morning person, even when your body is crying out for “just another five minutes”.

As the saying goes though, a leopard can’t change its spots, and over the years I’ve found myself craving the holidays, if only because those days don’t come with a pre-7am wake-up call.

In the early days of the current crisis, I was still getting up in the dark, because there was so much to do – furloughing was brand new, and my attention was needed in multiple places in a short space of time.

But as the pressure started dying down, so did my resolve.

I started hitting the snooze button more, because – well – why not?

The warmth of the morning duvet is difficult for a night owl to say goodbye to, particularly as there’s no pressing reason to get up immediately.

But as the pressure has subsided, so has the structure for my day, which is why I had the bizarre realisation the other day that I actually miss having to get up.

In the good old days, the children would go to school.  Remember those?!

My alarm would go off at 6.51am, I’d snooze it until it went off again.

When it did, I’d wake up for the seven o’clock news, let the dog out, make coffee, tell children to get up AGAIN, breakfast, and get the children out the house.

My space. My time for work.

Now, no one’s getting up and going anywhere. And they won’t be until September.

Which means that the time I get up is now in my incapable hands.

As a result, I’m hitting the snooze button far too frequently because my plans from the night before to “get stuff done” evaporate in the delight of 10 more minutes snuggling under a warm duvet.

Work time is all the time and none of the time, because I am working from home, so it’s getting done; but just not in as structured a fashion as I’m used to.

So, now I’m a night owl craving early morning rises; lockdown has a lot to answer for! 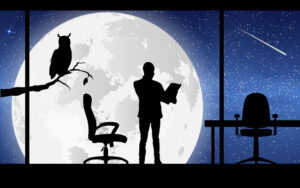