As you might expect, we’re very busy at the moment.

Clearly, we’re heavily involved in several restructuring projects, but we’re also dealing with long-term sickness absences and a few – believe it or not – disciplinary processes.

One of our key roles in all people management issues is to ensure our clients follow all the correct processes, and if they do, they give themselves the very best chance of being protected.

But by making sure a fair and reasonable process is followed, we minimise the danger of an ambulance chaser solicitor seeing pound signs when they hear what has been going on.

In 95% of the processes we carry out, just following the correct process and guidelines is enough to make sure that there is no Early Conciliation or tribunal claim.

But for the other 5% we have an ace up our sleeve – settlement agreements.

What is a “settlement agreement”?

They were renamed to make them less “confrontational”, but the aim remains the same: to get the employee to agree to waive their right to sue you for a perceived (or actual) wrong, in return for an amount of money.

The reason why we don’t start with a settlement agreement in most situations is that, if a client has diligently followed the right process, they can end up handing over a load of money that they didn’t need to.

If an employee is not already in a process, redundancy or long term sickness management, then approaching them with a settlement agreement gets very expensive, and confrontational, very quickly.

However, when you introduce the notion of a settlement agreement during a formal HR process, then it becomes clear to the employee that their options are:

In this scenario, people are much more open to the negotiation, especially if they are aware that theirs may not be a valid claim, because their employer has followed the correct process.

The best times to offer a settlement agreement are:

The worst time to offer a settlement agreement is if you have no money to pay more than the notice period.

Settlement agreements can be very quick and effective, but the amounts involved are not pocket change, and you’ll generally have to pay them more than their notice period (sometimes much more) as you’re actually paying them for giving up their right to sue the business.

So, to work out how much you should be paying, as a minimum, you need to pay them their notice period PLUS what they would have got if they had been made redundant PLUS a sum for giving up their right to sue you.

We can draw up the settlement agreement for you, negotiate with the employee’s solicitor and help you reach a mutual agreement, which means you avoid any danger of a tribunal claim against you.

Contact us if you would like to discuss using this very effective tool in your “new normal” business strategy.

P.S. One word of warning though – for a settlement agreement to be valid, the employee’s solicitor must confirm in writing that their employee understands their rights and is signing the agreement in full knowledge that they’re giving up the right to sue.

If you don’t receive that confirmation, the agreement isn’t worth the paper it’s written on, so be sure to dot all the Is and cross all the Ts if you’re going through this process. 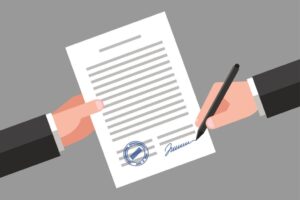