It’s the consultant’s curse – people value your advice enough to ask for it, but try everything they can to avoid paying for it.

But this week, we experienced the complete opposite.

A golf club client of ours point blank refused to take the advice we gave them.

Advice that they’ve already paid for.

The club had received an ACAS Early Conciliation (EC) notification – EC is the stage just before formal tribunal, so they were – understandably – pretty worried.

The employee in question had worked for them for six years on a zero hours contract, had been given notice in February and left at the end of June because the notice period had been extended.

So what was the problem?

Simple: the employee had worked for them for over two years, which means that in order to give them notice, they were required to do a redundancy or disciplinary process.

Which is what we advise all our clients to do, for one simple reason:

The club thought otherwise, convinced that the fact she was zero hours meant that they didn’t need to do any sort of process.

As it turned out, they’d never given her a contract, which meant she wasn’t even classed as a ‘zero hours worker’, but rather a part-time worker.

To compound the error, they only paid her 80% of her salary during the notice period (which is totally illegal) AND they kept claiming furlough throughout that period too, which is also completely illegal.

What should they have done instead?

Completed a straightforward redundancy process, resulting in her receiving the tax free sum she was entitled to and the outstanding holiday she’d accrued.

Instead, their actions meant that she had every right to sue for unfair dismissal.

And if she did, she’d win, hands down, receiving a full year’s salary AND a 25% uplift because the club had failed to follow the correct procedure.

Oh, and chances are the judge would probably have applied ‘injury feelings’ on top of that, which would result in a £20,000 bill, plus legal fees (hers and theirs).

They came to us, and we entered negotiations, getting her to agree to a settlement figure just under £3,000,

We were feeling pretty pleased with ourselves, right up until the moment when the club’s treasurer refused point blank to pay her anything.

In his “expert” opinion, she wasn’t entitled to a penny, and was willing to go to tribunal to prove it.

We advised the Club again that they would lose, but only time will tell whether they take this advice on board.

We also considered suggesting the treasurer put aside a pot of his own money to pay the inevitable legal fees resulting from his ignorance, but felt that suggestion would likely be taken exactly as it was meant!

Three takeaways from this bizarre episode: 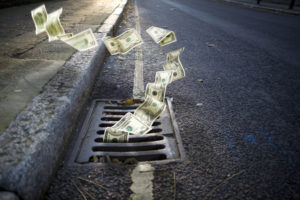